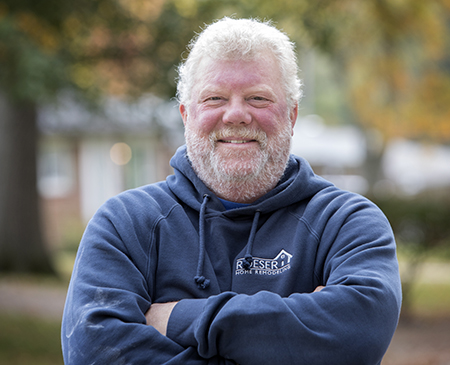 Ken’s career choice came naturally to him as a third-generation carpenter. Therefore, he joined the St. Louis Carpenter’s District Council Union as an apprentice in 1983. As he worked his way through the ranks to becoming a Journeyman Carpenter, he worked for several residential and commercial companies. As a Journeyman Carpenter, he worked in residential home building and remodeling which enabled him to sharpen his skills. He then landed for several years with big name commercial companies such as Paric and Clayco. With his vast knowledge and abilities, he soon advanced to becoming a Project Manager for various types of projects. This allowed him to develop further his impeccable organizational and management skills.

He loves the remodeling end of the industry because it constantly challenges him. He enjoys the camaraderie with his co-workers, and loves a good joke or prank along the way. Though having fun is important, the most satisfaction he gets out of his job is producing a project that looks great and leaves the homeowners thrilled. That’s when he feels good about collecting his weekly paycheck!

Ken lives in the country and enjoys that time with his wife Marie, his kids, his grandchildren, and his dogs.