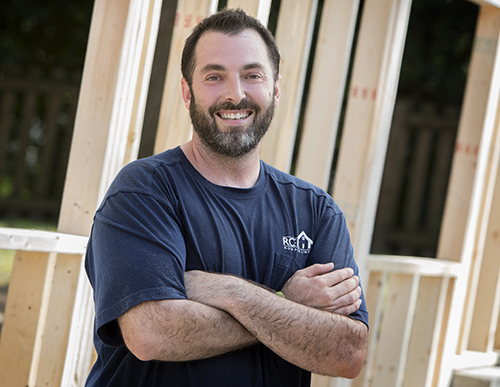 Travis had the heart of the outdoors, so he knew from early on that he did not want to be behind a desk somewhere. He loves being outside no matter what the weather! (for the most part) The Roeser’s met Travis on their “Tear It Up – STL” Project. He was a friend of the homeowners and helped one weekend with the huge job of demoing the existing house. As insulation floated and heavy plaster over drywall came off the walls, the Roeser’s noticed what a hard-working young man Travis was. He did not back down from heavy lifting, or dirty, itchy work.  He plugged along quietly and at a consistent pace until the job was completed. Knowing he was a landscaper and happy with what he was doing, the Roeser’s just appreciated his help and left it at that.
Almost a year later, Travis came in for an interview. He was looking for a career change that offered some of the things he loved about what he was doing; working with homeowners, being outside, and physical activity, but also afforded him the opportunity to advance in a career that could support a family and provide benefits. It was an easy fit for the Roeser’s! We were happy to have Travis build a career with us.

Travis loves learning something every day and enjoys having the ability to have contact with homeowners. He loves being part of the process and seeing the homeowner’s reaction to the final product.

His spare time is spent with his fiancée, Ashley and her son.